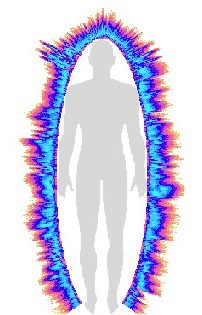 Dr. Richard Jelusich presented his research on the effectiveness of Integrative Chakra Therapy™ (ICT) at the California Institute for Human Science (CIHS www.cihs.edu) 2017 Annual Symposium on “Forefront Consciousness and Healing Science Research: Reports from the Field”. The outcomes of his experience are noted here:

On July 9, 2017;
It was a grand opportunity to take the stage with fellow researchers in the fields of consciousness and biofield science research.

The past 18 years ICT, has been a foundational part of my life with over 500 students and graduates in the U.S. and Canada who have taken by 2 ½ year course of study and practice. ICT works on the level of the chakras, one step above the pranic (ki, chi, etheric) level. For instance, the 3rd chakra (Manipura) converts its “PSI” energy into the prana that flows to the pancreas and the pancreas energizes the blood with prana.

The work and studies that have come from reviewing the Chakra System daily has led me to develop ICT a theory based on my personal interpretation of the chakra system and dominant chakras. That is, that one of our seven chakras is more “dominant” than the others, and thus more affects the way we perceive and react to life than the other chakras. In addition, that the chakras affect the four archetypes of “the whole human being”: physical, emotional, mental and spiritual. These four archetypes make up the character of the human being and as a person seeks to awaken their chakras, the spiritual powers in the chakras allow the person to become more aware in what are called ‘superconscious’ states.

My presentation suggested the combination of the chakras, Shushumna and Ida/Pingala are the true human aura (biofield) that this combination is what holds the human being in space/time. In other words, that the “biofield radiates you, you do not radiate the biofield”.

As part of the research, a volunteer was selected for subtle energy healing.  With the help of Psy-Tek (www.psytek-labs.com) a subtle energy laboratory and research facility on the CIHS campus in Encinitas, California); we were able to take measurements before and after the implementation of ICT.

Using a Gas Discharge Visualization device (GDV) measuring the electro-photons (Kirilian photography); we were able to measure the ‘aura’ of each digit segment and the ‘aura’ of other body parts.  The image below shows a photograph of the 1st digit of the right hand.

Note: Each digit has different correlations to the body. All ten digits are measured, one at a time and the computer uses an algorithm to then create an ‘aura’ (bio-field) around an icon of the body to identify strengths and weaknesses of the ‘aura’ related to the physical and non-physical (etheric) bodies.

Both these “No Filter” and “With Filter” measurements were taken before and after the practice of ICT healing work. The result looks something like this with the ‘aura’ around the body segmented into the many organs and glands for identification. The photo here shows the aura only. 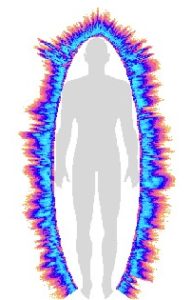 Our volunteer subject was an older male in good health. Using the GDV we measured and recorded images as described above; to get a baseline before any ICT healing work was performed. I then worked with our volunteer for about 10 minutes, using the exact methods that are taught to all students in ICT training.

Of significance, I had noted his 5th Chakra (Throat, Vishuddhi) was deficient and that his 3rd Chakra (Solar Plexus, Manipura) was very deficient.

After the ICT healing work was performed we see new results 1st: With No Filter, measuring the Energy Body, the After image shows more energy in the 5th chakra. 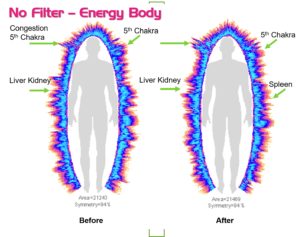 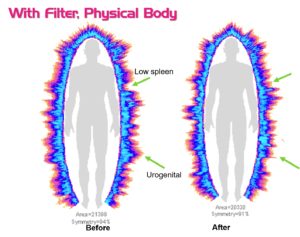 And here the 2nd results With Filter (Physical Body). As you can see there is a significant increase in the energy of the physical spleen and the urogenital system appears to be more normalized.

In addition we were able produce a printout where we see a green circular band; a generalized ‘norm’ established among many of the measurements.

The chart below is related to the energy body; what is happening above the ‘physical level’. The two images relate to the left and right side of the volunteers body. The blue line represents before the ICT healing, the red line after the ICT healing.

Image Notes; in the left image, the spleen (connected with the 3rd chakra) has more energy as does the transverse colon. In viewing the image on the right, the blind gut (where the large and small intestine meet) reads more energy and the lumbar/thorax zone reads much less energy. 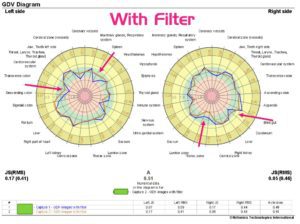 In the following images the GDV has interpreted the condition of each chakra before (left image) and after (right image). The icon of the volunteer shows a vertical green band that is the ‘normal’ range for the chakras. As you can see in the before and after images, the chakras appeared to be pretty much in alignment, with the root chakra in the ‘after healing’ image coming into alignment with the other chakras.

The energy activity level of the throat chakra in the right images shows more energy in the ‘after’ image, due to the healing work. 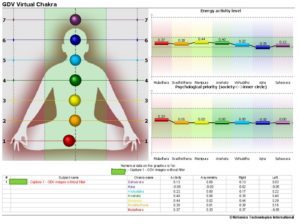 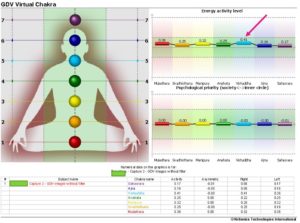 I am pleased to say: “With these types of measurements, we are showing positive results from the ICT healing work performed.
• The 5th chakra in the energy body appeared more energized
• The physical spleen appeared to have improved energy, smoothed and redistributed
• The urogenital system appeared to have less excess energy”

Of note; when working this form of energetic healing, at the level of the chakras, practitioners always tell the client that they may go through 3 to 5 days of further healing. This is in alignment with the studies at Psy-Tek labs, in that they have noticed there may be physical affects in the body that show up 3 days later as a result of the energy work performed. So we could have waited 3 days after the healing work, taken another measurement, and discerned if there were any more or other discernable differences due to the healing work.

I believe this beginning study proves that Integrative Chakra Therapy™ had a positive effect on the volunteer, and that more research is needed. More studies will be conducted in the future as ICT gains in popularity and acceptance as an effective form of subtle energy healing. In proving that, working on the level of the chakras, as different from pranic healing.