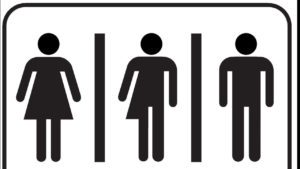 When I first began my spiritual journey in earnest almost 30 years ago, I learned that we are androgynous (both male and female) in the higher dimensions. And soon thereafter, I realized that beyond androgyny is oneness (no I or thou, no male or female). That ultimately God is not Mother/Father God but rather non-gendered as All That Is. That God is in everything and everyone.

It seems in the last 50 years there has been much progress and many challenges on the subject of gender identity and sexual identity.

In San Diego, my home town, has seen some rather major changes. San Diego is historically a ‘military town’ with a huge Naval and Marine presence. Hence, San Diego has enjoyed a strong conservative image. In the last year at the San Diego airport (I travel many times per year through this airport) I noticed that there are bathrooms with placards marked “All Gender Bathroom” along with 3 symbols of a woman, a man, and a man/woman. For San Diego, this is a huge shift in public image with the large number of people traveling through its airport. And it seems when you look around, most of North America is embracing diversity.

Not without much challenge – major retailers announcing gender-friendly bathrooms are encountering much resistance and many valid questions as to whether this is going too far, creating a dangerous environment, crossing religious and moral lines, and so on.

But it is not as much a leniency as it is a consciousness whose time has come. That does not mean we have abandoned rules of decency and morality in favor of diversity and laissez-faire. For many years, we have been caught up in a religious/cultural projection of what we must be, do and look like to be approved in society and in the eyes of “God” (depending on the religion).

When confronted with the difference between religion and spirituality, many people have retreated to their comfort zones under religious belief systems, while many people are abandoning religious tenets that evoke fear in favor of courageously making the inner journey to seek their own inner God-realization.

I believe that the subject of gender identity and sexual identity are externalizations of the consciousness in this era of inner transformation. Isn’t it interesting, when you study astro-archeology (the study of ancient civilizations) that the glyphs, stelae, codices and writings speak of higher levels of consciousness previously attained by you and I in previous lifetimes. Not that it is related to gender, but to consciousness.

And here we are again because the questions must be addressed. The merry-go-round has revolved past the dark ages again and we rotate into the Yuga (cycle of consciousness) that is Dwapara (the electrical age) where we are supposed to become aware and embrace (realize) the subtle energies of our universe. That to me, perhaps, we did evolve to a level where we regarded the character of the person as greater and more central to the essence of an evolved consciousness than their gender, identity, sexuality and so on. As we address questions on gender identity, we are assessing our own levels of consciousness.

Just 400 years ago we ‘discovered’ electricity, magnetism and gravity. And quickly we realized that these forces have always existed. We were meant to become aware of them. And now we are aware that chakras and meridians exist, the Biofield is real and so are quantum dynamics.

But it is because we are supposed to become aware, as this is the age of consciousness predicted by many ancient races of higher levels of awareness achieved.

So gender and sexual identity are definitely up for review. It appears the youth of today are much more open to sexual and gender identity expression than even a generation ago.

As a child who was intensely psychic, I did not perceive such differences in character between male and female. And yes, growing up in school it was easy to be derisive of others regarding just about any attribute you can think of. And today, I see the amazing qualities and potentials in people, regardless of expression of gender or sexuality and I embrace that such changes are finally coming to externalize as healthy, positive and courageous movements towards higher self-expression. Ultimately, my sense is this is part of our mutual raising of consciousness towards the realization of our true spiritual nature.

Do you fear that a person identifies with a gender different than their anatomy as a threat to you or do you fear that you must face your own predispositions and beliefs?

What is it to be male? Female? A person? Gay? Lesbian? Transsexual? Pansexual? Why are there today so many infinite variations and gradation upon the theme of gender identity? How does one add in measures of morality, decency, fidelity to gender? Is it a facet of our search for self?

It is my belief that as one ascends in levels of superconscious states of awareness, ever-increasing realization of the unity of all things occurs in their being. That is, we are globally affected by the consciousness of the 2012 era, (which will continue as a process of consciousness externalization for the rest of in this century) an epoch on the Yugas of consciousness where we are ascending to higher states of being that are being offered to us in lieu of our fears, doubts and fogs of illusion of separation.

As there are inseparable elements of Yin in Yang, and of Yang in Yin, and yet unity is implied, so also are we inseparable as to the duality of the elements of gender in our being. How you choose to display your gender is up to you: as befits the mores of our society and culture. But there are so many people asking relevant questions that our society and culture are morphing before our very eyes.

And having studied spirituality for many years, my sense is how attracted we are to the fascination of gender and so forth will lose its power over time as we ascend to higher states of consciousness. If love, harmlessness and compassion are the centerpieces of your lens on the world, the push-pull of the energies of gender identity will have less effect on you and thus less polarizing effect on those who enter the constellation of your life’s journey.